FileMaker 17 introduced a trial version of the Admin API. Now we have the production version of this RESTful API which will work with both FileMaker Cloud for AWS 1.18 and FileMaker Server 18. This represents another evolutionary step towards exposing more of the features of FileMaker Server for third-party integrations and convenient tools.

I have written such a tool in FileMaker Pro, which allows you to manage a FileMaker 18 Server. This Admin API tool is freely available here.

This version of the Admin API does make several improvements. If you find some difficult to understand, know that they adhere more closely to how REST APIs work. They’re not meant for general consumption of most FileMaker developers. In other words, the documentation may make more sense to a web developer used to working with APIs. Hopefully, the tool referenced above can help bridge the gap in understanding for the uninitiated.

Authorization follows authentication. Once you authenticate login credentials successfully, you receive an “authorization token” or “access token.” This acts like a key you use to unlock all the doors that work with that key, without having to authenticate at every door.

Using authorization tokens is a more secure and compliant way of working with REST services. It affords multiple levels of compliance with several different existing standards, such as Oauth2, an open standard for authorization.

As with many RESTful APIs, getting past the authentication and authorization is sometimes the most challenging part. Once you are past that, you can get to the business of working with the API.

Other concepts that are important to understand when working with REST APIs such as the Admin API are the different HTTP verbs and working with JSON payloads. HTTP most commonly uses a couple of different verbs – also known as methods – to transfer data. At the core, these are GET and POST, but they also expand to include PUT, PATCH and DELETE which are sent as POST transactions but with the method specified differently. These different verbs correspond to CRUD operations: Create, Read, Update, and Delete.

The Admin API uses GET, POST, PATCH, and DELETE to perform various operations. These are highlighted with buttons in my Admin API tool colored to match how they appear in the documentation. They make it more obvious which one is being used for a given operation. 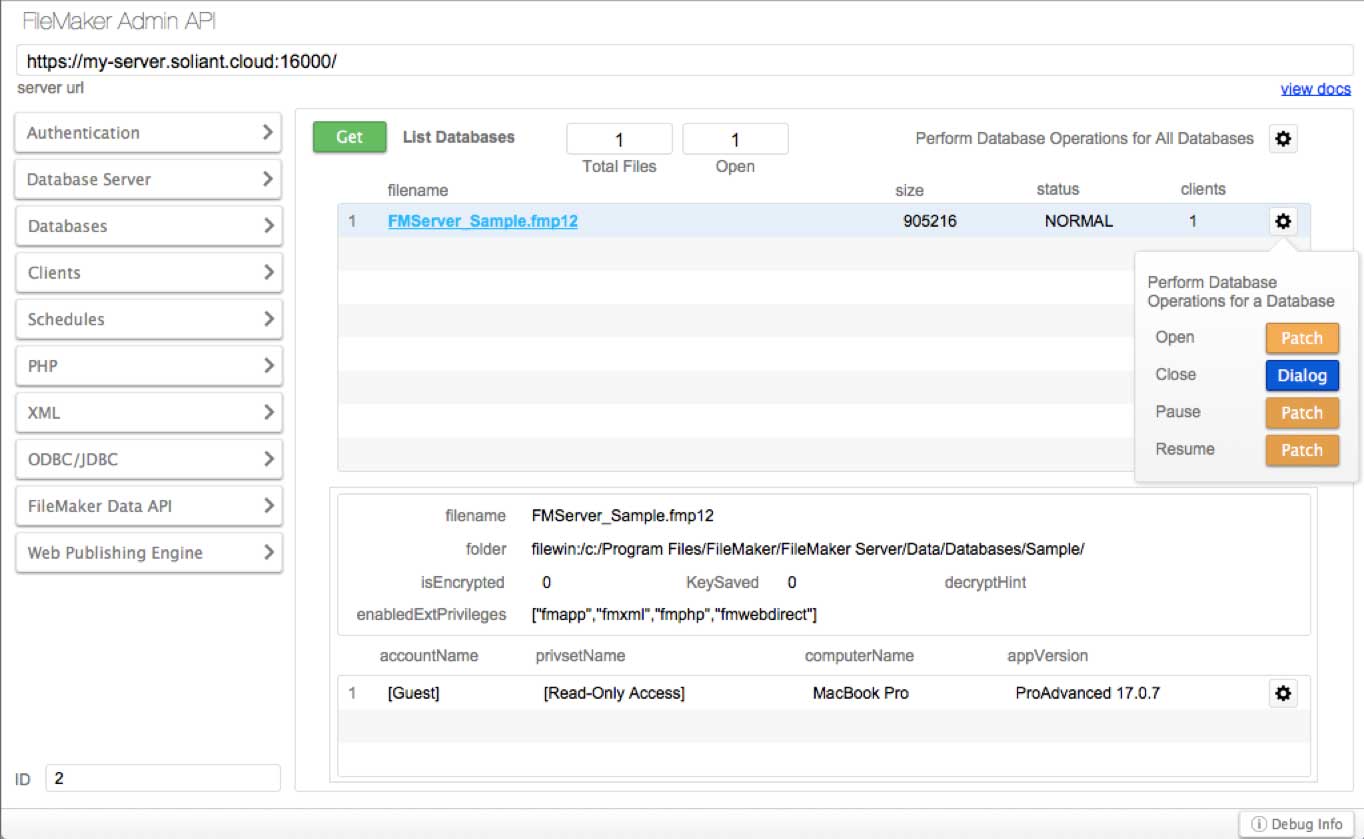 In any RESTful operation with the Admin API, you will get a response back in the form of JSON. In some operations where you also send data to the Admin API, that data will be sent as a JSON payload. You should already be familiar with JSON since the introduction of JSON functions in FileMaker 16. These native functions make it easy to construct and consume JSON while working with the Admin API. For more information about working with JSON, see the blog posts about creating JSON and parsing JSON by Anders Monsen.

All interaction takes place by using the cURL options available in FileMaker Pro, via the “Insert from URL” script step. My Admin API tool provides a “debug” popover to display the results of the last operation performed, including the JSON data and the HTTP response received from the server.

FileMaker Server provides several administration tools. Those include the web-based Admin Console and the CLI (Command Line Interface), which is accessible from the server machine. Add that to the Admin API, and you have three possible options for managing FileMaker Server. However, each option has a slightly different set of features. Of the three, the Admin API has the least available in terms of what you can do, at least in the current version.

In the current iteration, there is nothing you can only do with the Admin API that you cannot accomplish with either the Admin Console or the CLI. I expect that to change in future versions, as the Admin API gains functionality. Add to that the fact that FileMaker has a robust and involved community, which allows third parties to come up with innovative solutions that use the Admin API.

One last note — the Admin API now requires all communication to go over port 16000, also the default required port for using the FileMaker Admin Console. This allows you to control access to that port and allow generally used ports for web publishing and WebDirect, 80 and 443.

To find further documentation that gets installed with FileMaker Server, just go to your server’s URL in a web browser, with “:16000/fmi/admin/apidoc/” appended.

Mike is an AWS Certified Solutions Architect as well as a certified FileMaker Developer. In addition to his work, Mike also enjoys pursuing his art, freelance writing, traveling, and spending time with his family.