JSON (JavaScript Object Notation) is an open standard format to send data that consists of an object with name-value pairs. JSON has its origins with JavaScript, but as many other programming languages have adopted it as an alternate to XML, since JSON is far less verbose than XML. Many web services return data in JSON or XML, and sometimes both are offered as options. FileMaker 16 introduces native functions to create and extract data from JSON, making interactions with web services easier and more streamlined. This article focuses on how to create JSON objects from within FileMaker 16 with new, native functions.

JSON objects begin and end with braces – { } and may contain arrays, other JSON objects, strings, numbers, null values, and Boolean values. Although JSON objects can contain one single element, the power of JSON is that it allows for nested arrays and objects. It’s important to note that the keys are case sensitive, so “firstname” and “FirstName” aren’t seen as identical. However, the order of the JSON keys, and any whitespace between text, does not affect how systems read the JSON object.

The FileMaker 16 function used to create a JSON object is called JSONSetElement.

There are four required parameters.

The examples listed below are taken from a demo file. Some examples appear in records, so that you can test different values and see these create JSON in real time. Other examples are illustrated using scripting techniques. This screenshot illustrates the record example, which provides instant feedback. 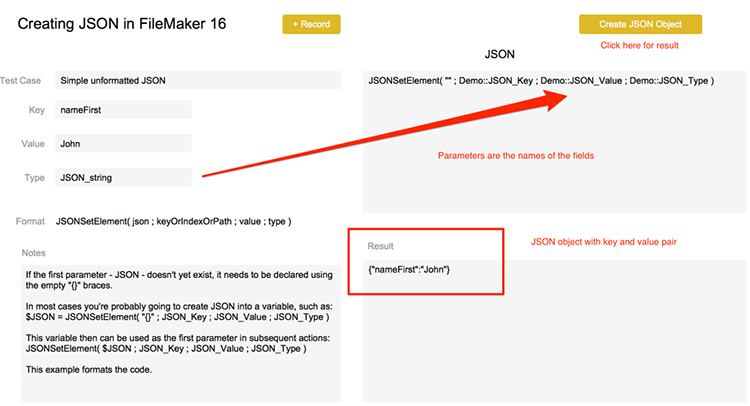 There are many ways to accomplish similar goals in FileMaker. Being able to step through a script a see how the JSON is created in smaller increments is something I see a good starting point for anyone new to this type of data format, especially when constructing complex objects. 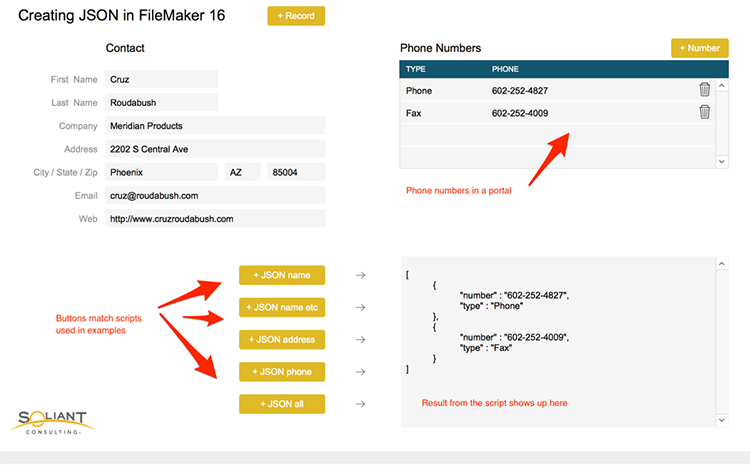 Figure 2. Stepping through a script

Setting a key-value pair with a string, number, Boolean, or null value is the simplest JSON one can create the following combinations For example:

*Boolean types don’t require quotes. If you use “false” this is considered a string.

**Null data types ignore any values in the third parameter.

It’s also possible to pass multiple sets of “keyOrIndexOrPath ; value ; type” input in one function call, using the square brackets, much like the Substitute function.

The following examples are illustrated on the Contacts layout in the demo file.

A JSON array is a collection of values enclosed within square brackets and separated by commas. When present in a JSON object, arrays still have a key, such as “phoneNumbers”, but are extracted using the index, or order within the array. Arrays are zero based, so the first index value is 0, the second 1, and so on. For example, this simple array uses the key of “random” for both values in the array, but to get the first value you add the index – random[0].

Creating an array, therefore, means you populate it by specifying the index number.

To declare an array in JSONSetElement you need the “[]” which the actual JSONSetElement refers to when adding data. Below is a loop in a script to populate an array. The $counter starts at zero as array indexes have zero as the first value. Each element in the array matches a numerical index, from 0 to n.

This array is now ready to be added to a JSON object.

The “4” here is the data type, which corresponds to an array.

This simple array is now ready to be understood by any program that interprets JSON.

From an example with random numbers we move to actual data. In a contact record with phone numbers, the array might end up looking like this:

In this case the array elements are objects, since there are multiple items, like number and type. The same principle applies, although we would first contrast the number and type object, insert this into an array, and then create the JSON with the phoneNumbers object. For the data parameter, instead of using a number, I’m relying on a custom function that makes it more obvious as to the data type, such as JSON_string vs. JSON_object.

Like arrays, objects can store multiple values. Whereas arrays are grouped inside the square brackets like peas in a pod, objects are strung together, but still in a sense separate. Not to cloud an existing FileMaker concept, but objects are more like anchors with buoys strung along, or a fishing line with multiple hooks; they all relate back to the main key.

This process is far simpler than arrays, at least for something like the address. Instead of a loop, we construct the content of the object first, and then link this to the parent object.

Gathering it all together

Now that you have key-value pairs, arrays, and nested objects for the contact record, creating one single JSON object with all this information is just a matter of putting together all the elements into one JSON object as can be seen in the demo file’s “Create JSON Contact Info” script.

JSON in FileMaker 16, in Summary

There are both external and internal uses for JSON.

Knowing how to create JSON is a requirement for using many web services. Combined with cURL features in the Insert from URL script step, you can now send JSON built from FileMaker records.

Within FileMaker, JSON could be used to handle multiple script parameters, store users preferences in a single object instead of across multiple fields, gather changes in an audit log, and even duplicate records including data in portals. Imagine the possibilities.

Get the Demo File

If you have any questions about how leverage JSON in your FileMaker solution, please contact our team. We’re happy to help your team determine the best way to drive more efficiency in your organization using the platform.

Anders is a Lead Developer for Soliant Consulting. He has developed in FileMaker since 1994, spoken at DevCon from 2010-2013, and written articles on FileMaker and PHP. He is also a runner, cyclist, martial artist, and working on writing crime fiction.