Script triggers are a straightforward concept, but there’s a lot of detail to learn for each one. This post will break this detail down in several different ways with the intent to organize the information so that it can be learned and absorbed more easily and effectively. 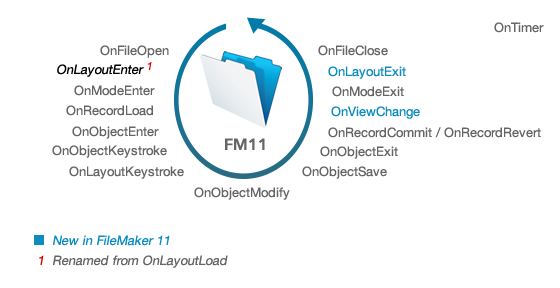 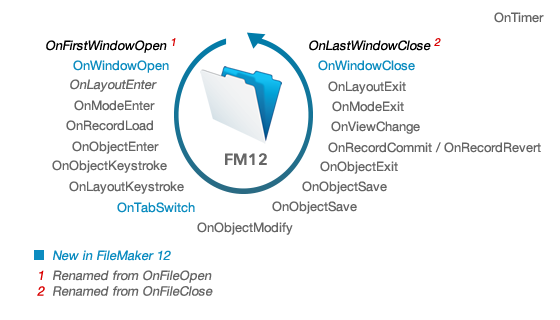 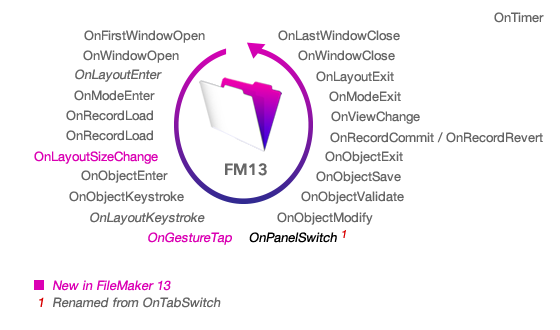 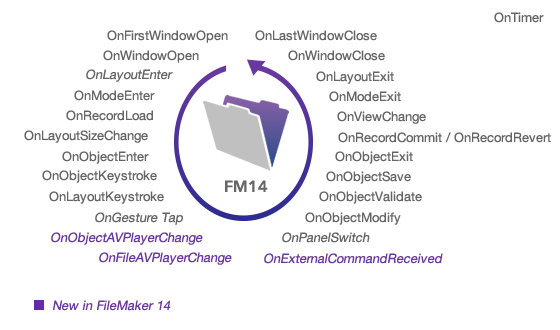 Script triggers are set up at one of four levels: file, window, layout, and object.

The 5 file-level triggers are:

The sole window-level trigger is:

The 8 object-level triggers are:

The OnTimer trigger is set up differently from the other script triggers; it is installed (and removed) as a script step. All other triggers are set up in settings dialog windows. The file-level triggers are configured in the File Options dialog. The layout and object triggers are set up while in Layout mode, as an attribute of the layout or object that they belong to.

When multiple events are triggered by a single action, they are processed in the order shown in the diagram below: 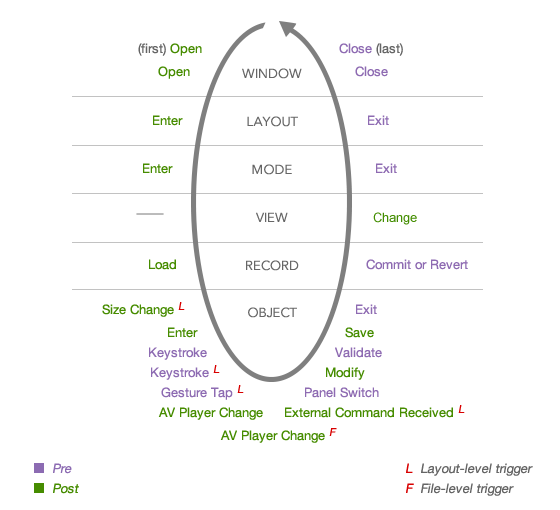 The sequence shown in the diagram is important, but not in all cases. For example, OnGestureTap is shown after OnLayoutKeystroke instead of, for example, OnLayoutSizeChange, but this particular order does not matter, because you’ll never be in a situation where both of these events can fire.

Some script triggers are processed before the triggering event is processed, and others are processed after it. For example, if you click into a field, FileMaker will enter the field, and then the OnObjectEnter trigger will activate. This is referred to as a post-event trigger. However, if you click out of a field, the OnObjectExit trigger will activate before FileMaker exits the field, since it is a pre-event trigger.

It’s important to know which triggers are pre-event, because FileMaker allows us to cancel the triggering event for these triggers by exiting the script with False. In the example above, if we exit the script that is called by the OnObjectExit trigger with Exit [False], the user will not be able to exit the field, which can be useful if for example an invalid value was entered.

There is (of course) one exception. The OnObjectSave trigger is a post-event trigger, and FileMaker does allow us to cancel its triggering event. However, if we do this, the object’s value will still get saved (even though the event will be canceled). An example may help to explain this better: Suppose we modify a value in a field that’s configured with the OnObjectSave trigger. We then click out of the field. The trigger fires and exits false, which prevents the leaving of the field. The modification we made to the field value will still be saved though.

These triggers are iOS-only, and their function is to provide developers with the ability to control what happens when audio, video, and image media is played, paused or stopped using the iOS A/V Player.

The OnObjectAVPlayerChange trigger is assigned to a container field. It fires when an image, audio, or video stored in a container field is played, and when the playback is paused or stopped. It will fire regardless of whether the presentation is full screen or embedded in the container field, and regardless of the media change event (play, pause, stop) was initiated by the user or by a script.

The media playback can be scripted using these three new script steps:

Developers can determine the playback state using this new function:

The OnFileAVPlayerChange trigger is assigned to a file. Using the new script steps listed above, users can script the playback of media stored in a container field or streamed from a URL without having that field or a web viewer shown on the current layout. This trigger will fire when the script step plays, pauses, or stops the media, or when the media stops on its own because the end of the audio or video was reached.

Note: The new script steps and the new function mentioned above (in the OnObjectAVPlayerChange section) are equally relevant to the OnFileAVPlayerChange script trigger.

The OnExternalCommandReceived trigger is assigned to a layout. It fires when a user presses external AV-related controls to activate one of the following commands:

Developers can use the new Get ( TriggerExternalEvent ) function to find what external command was pressed.

Examples of external controls include:

Note that this trigger will fire even when the AV player isn’t active. For example, if you tap on the play button in the control panel, this trigger will activate, even if you weren’t playing any audio or video at the moment.

In addition to adding three new script triggers, FileMaker 14 also changed how OnGestureTap behaves. This script trigger was iOS-only in FileMaker 13 but is now also supported on Windows 8 touch devices. The gestures that are supported are:

FileMaker 14 also supports pinch zooming and other gestures on other devices. For example on a MacBook, you can zoom in or out by pinching the trackpad. However, these gestures do not activate the OnGestureTap trigger.

That’s it for this overview. For a more complete reference, take a look at the PDF document we’ve put together, and also please check out the demo file which you can use to see for yourself how script triggers work. The demo file has a layout that has every type of field and object on it. And the file, layout, and each object have every possible script trigger enabled. Make sure to access the file using all three clients (Pro, WebDirect, and Go) to learn how script triggers work on each one. 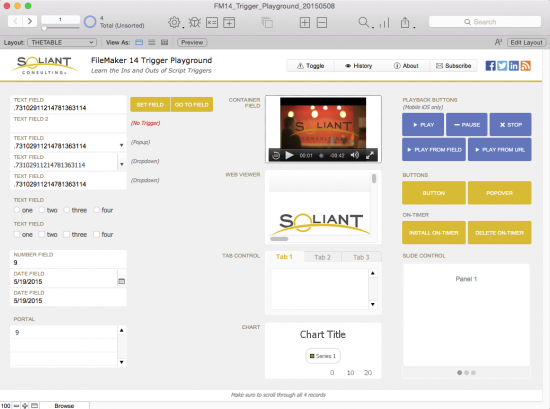 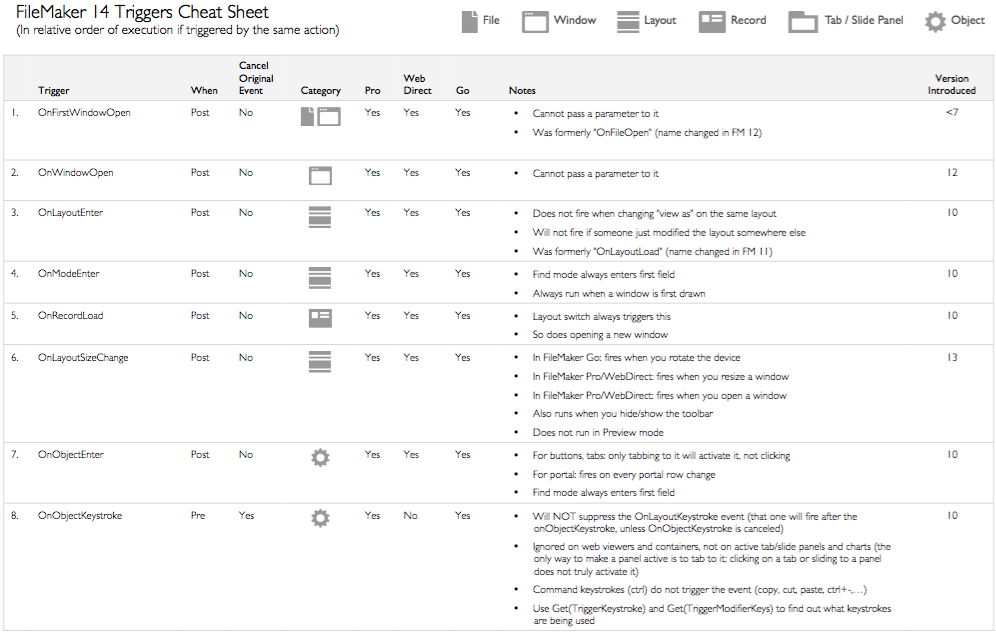 FileMaker 15 and 16 did not introduce any new script triggers. However, FileMaker 16 does bring one change worth mentioning: the new “Configure Region Monitor Script” step can be used to trigger a script to run when an iOS device enters or exits a region. In this way, it is reminiscent of the “Install OnTimer Script” step, which also causes a script to run based on some event.