FileMaker 18: How to Send HTML Emails Using Insert from URL

The original demo file used the TextEncode function to create the email message file. This function becomes excruciatingly slow when the email includes larger attachments; e.g. it takes longer than a minute to encode an email with a 3 MB attachment.

The demo file has been replaced with an updated version which uses the file manipulation script steps to write out the message file to a file in the temp folder and then read it back into a variable as a container value. This performs much better with larger attachments. However please keep in mind that the file script steps are not supported with WebDirect, so if you need this to work with WebDirect, you will need to use the original TextEncode method.

The demo file has been updated to fix a bug (having to do with line endings) when sending non-MIME emails.

Prior to FileMaker 18, plain text emails could be sent using the Send Mail script step. FileMaker 17 introduced the ability to include multiple attachments. Now, fully stylized rich-text emails with attachments can be sent, but the process is not as simple as it was with the Send Mail step. This blog post breaks down much of what you need to know and supplements that with a demo file for some additional hands-on learning.

To send an HTML email, the Insert From URL script step needs to have the following items specified:

The URL specifies the protocol (SMTP or SMTPS), the fully qualified domain name of the SMTP server, and the port.

Here are some examples of SMTP URLs:

The cURL options specify additional instructions for delivery of the email. Here are some of the options that you may use, along with some comments for each one:

The SMTP URL and cURL options tell cURL where to send the email, to whom, and how, but they do not directly specify what to send. Instead, the cURL options reference a mail file which includes the content of what is to be sent. This mail file, referred to as the message, has to be constructed following particular formatting rules.

The rules can get quite complex, and a big driver of the complexity is the fact that each new email standard aims to be backward-compatible with the older standard that it supersedes. Some examples of this are the rules that require content to use 7-bit US-ASCII characters with each line of text limited to 78 characters or less (more on that later).

In my testing, I’ve found variations in the extent to which some of these rules are enforced. My guess is this is due to differences in how the various SMTP servers and email clients have implemented the standards that define how internet email works, similar to how support for HTML and JavaScript is implemented differently across different web browsers. The lesson from this is that you may get something to work for a particular SMTP server or email client, but if one of those factors later changes, it may end up breaking the functionality.

The message will always consist of a header and a body. In the case of MIME multipart messages, the body itself will be split up into multiple parts, each of which will have its own header and body.

Each part in a multipart message will specify a MIME type to indicate the type of content included in that part. Some examples of MIME types include:

The full list of defined MIME types can be found here.

So that email clients can tell where one part ends and another begins, each part in a multipart message is separated by a boundary which has to be a string of printable 7-bit ASCII characters (codes 32 through 126) with a length of 70 characters or less, and which must not appear in any of the encapsulated parts. Here is an example of a valid boundary: gc0p4Jq0M2Yt08j34c0p.

Alternative: The “alternative” boundary separates alternate versions of the message. For example, there could be a plain text version of the email to accompany the HTML version, so that old-school plain-text-only email clients can display the message correctly.

Related: The “related” boundary separates embedded attachments from each other and from the email message.

Mixed: The “mixed” boundary separates non-embedded attachments from each other and from the rest of the message.

At this point, your head is probably spinning with all of the details, so hopefully, this visual explanation will help clarify your understanding: 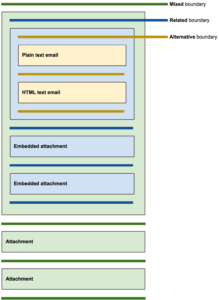 The main header section can contain fields such as From, To, Cc, Subject, and Date, but note that the To and Cc fields are not used to determine where the message should be delivered. That information is determined from the cURL options (covered above). The analogy is a paper letter that contains the destination address both on the envelope and on the letter itself. The address on the envelope is the one that is used for delivery. The address shown at the top of the letter is included for informational purposes only.

Here is an example of a simple, non-MIME formatted message:

A couple of things to point out:

Here’s an example of what quoted-printable encoded text looks like:

Unfortunately, FileMaker doesn’t provide a native quoted-printable encoding function, so I used base64 encoding in the demo that accompanies this blog post.

Here are some additional visual guides that show how email messages (both MIME and non-MIME) are put together.

The pilcrow character (¶) is displayed to denote places where an empty line should be inserted.

To simplify things, some of the text is represented using placeholders. This is denoted with angled brackets; e.g. <<EMAIL_MESSAGE_HTML_TEXT>>.

The first example is of a simple non-MIME HTML email.

When I tested sending out this kind of email, I was able to include non-ASCII characters, but the standard specifies that only printable 7-bit ASCII characters should be used. This is another example of the point made earlier, which is that different SMTP servers and email clients implement the standards in different ways, including building in support that allows for stretching the rules. However, if you want to ensure that your email implementation will continue to work regardless of what server or client is used, better adhere to the rules defined in the standards.

This second example shows two attachments included along with the HTML email. In this case, the attachments are not embedded within the email message. 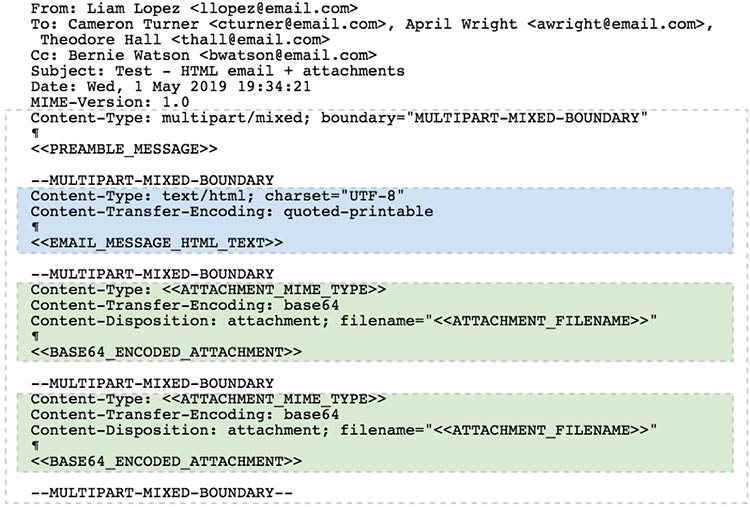 The preamble message is there so that non-MIME compliant email readers can have some intelligible message to show to the user. This message can be anything you want. For example:

This is a message in MIME format.  If you see this, your mail reader does not support this format.

The following example adds two additional attachments, but unlike the previous two, these new ones are embedded within the email. This is done by setting the content disposition to “inline”. 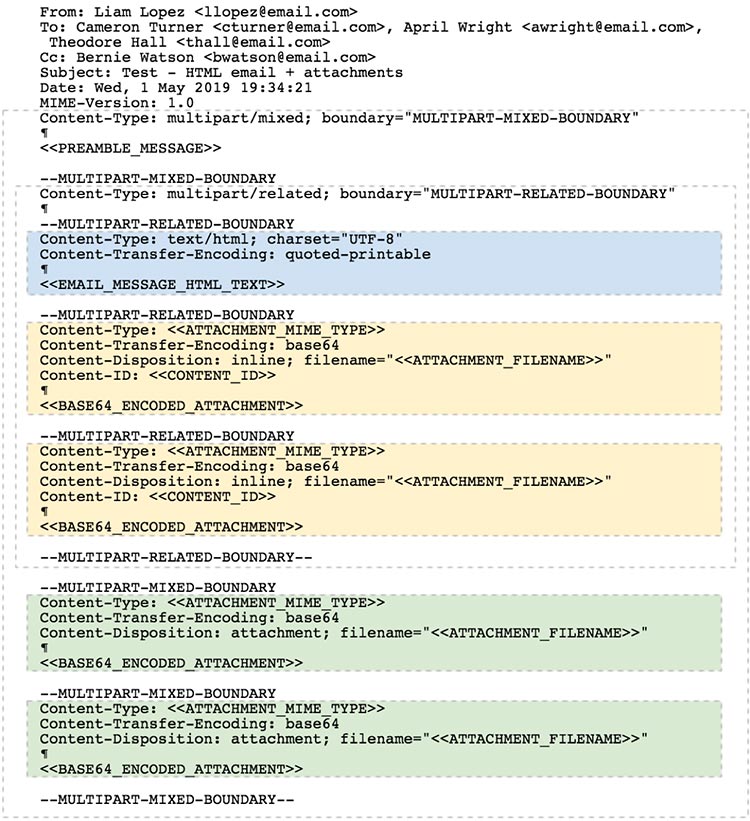 Then the image can be referenced inside the HTML email like this:

The last example uses “alternative” boundaries to add a plain text version of the email message. 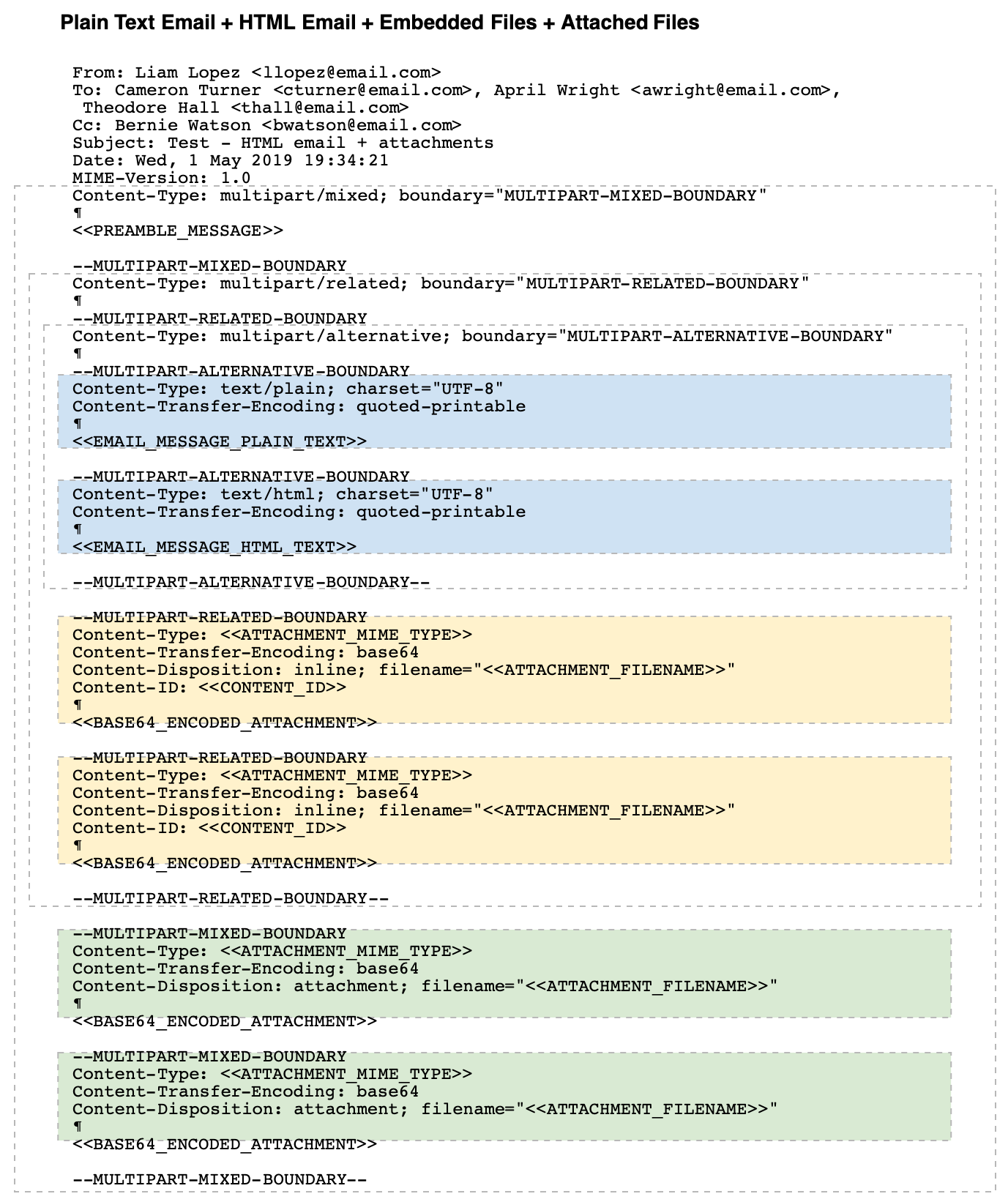 The preceding examples describe how a message body can be encoded to account for non-ASCII characters, but what if the message header also contains these unsupported characters?

For instance, the name of a recipient or the subject of the email could contain characters that fall outside of the 7-bit ASCII range. In that case, you can use encoded-words to convert sequences of unsupported text using the following syntax:

As a base64 encoded-word, the subject message header would appear as:

The two encoding options are “B” for base64 and “Q” for quoted-printable.

…could be encoded as follows:

You can read more about encoded-word syntax in RFC 2047.

We now have the ability to send HTML emails with attachments, but the step up in complexity is significant compared to the Send Mail script step.

Get the demo file

The accompanying demo file includes a script which does a lot of the heavy lifting for you. The script was written to be portable so that you can copy it into your solution without having to set up any tables or fields. (The script does rely on the “GetMIMEType” and “ErrorMessage” custom functions though, so you will need to copy those before copying the script.)

The demo file supports fully stylized emails which can be achieved through HTML or through FileMaker field rich text formatting (using the GetAsCSS function). Attachments can be designated as embedded (“Inline”) or as regular, non-embedded (“Attachment”).

The demo file does not, however, support alternative MIME parts, which are used to provide alternate (e.g. plain text) versions of the email message. And it does not do any folding or encoding of message headers. So if your message headers (e.g. subject or recipient email addresses) use non-ASCII characters or are longer than 998 characters in length, the email might not get sent out.

If you do not have an SMTP server readily available for testing, you can create a Gmail account and use the Gmail SMTP server. If you have two-factor authentication enabled (and you should), you will need to create an application-specific password. You can follow these instructions to do so.

As a final word, I’d like to thank my colleagues Brian Engert and Marcelo Piñeyro for their assistance with preparing this blog post and the demo file.