FileMaker 16 includes a host of new functions for parsing and manipulating text and binary data. The primary motivation for including these new functions was to support interactions with REST APIs.

Many of the text functions are targeted exclusively at working with JSON. However, two of them are more general-purpose and have been a long time coming.

FileMaker developers have had to make due with custom functions to do the job of these two, but now we can make use of native functions instead.

Let’s take a closer look at each one.

Datatype is an optional parameter taking one of these values:

If you leave the data type blank or give it an invalid value, it will default to 1 (text, ascending).

As is the case with most of the other FileMaker list functions, a trailing return is included at the end of each non-empty result.

The other optional parameter is the locale. It allows you to specify the language of the values being sorted. Different languages follow different collating rules when sorting text. For example, SortValues ( “Tom¶Brian¶Aaron” ; 1 ; “Norwegian” ) = “Brian¶Tom¶Aaron¶”. This is because, in Norwegian (and in Danish), “AA” is treated as “Å” and sorted below “Z”.

If you leave the locale blank, it will default to the file locale, which is set based on the operating system used when the file was initially created. You can read more about this here:

The valid locale options are listed in the SortValues help page:

Blank lines will not be ignored – except for the last trailing return. If the input list has one or more blank lines, those lines will sort to the top of the list (in the case of an ascending sort).

From my testing, the algorithm used for SortValues appears to be stable, meaning that values that are considered identical with respect to sorting will retain their relative order in the result. For example, “a” and “A” are considered equivalent values, and sorting a list of values which has “a” appearing before “A” will keep “a” in front of “A” in the result. This may seem obvious, but note that there are non-stable sorting algorithms out there where relative order isn’t guaranteed in the result.

The UniqueValues function removes duplicates from a list of values based on the specified data type and locale.

For the data type and locale parameters, the same considerations apply as with the SortValues function.

To determine if two values are equivalent, FileMaker uses the indexing definition of what a duplicate is. For text values, this means case insensitivity for most locales. But if you want to achieve case sensitivity, you can use the “Unicode_Raw” locale.

UniqueValues will retain the original order of the list, keeping the first value encountered; i.e. the values in the result will not be sorted or otherwise shuffled around.

With the release of FileMaker 14, FileMaker Inc. has deprecated the ability to create Runtime versions of FileMaker databases. As a result, SortValues and UniqueValues (and indeed all the other new FileMaker 16 text parsing functions) are not supported with Runtimes and will return “?” if evaluated within a Runtime application.

Big O notation is used in computer science to describe how an algorithm performs in best-case, worst-case, and typical scenarios. For example, for a sorting algorithm, best-case means that the list is already sorted.

Typical big O complexities are O(n), O(n log n), and O(n^2), where n is the number of elements being operated on.

An algorithm’s big O complexity matters when dealing with larger data sets (or if you have to process a smaller set many times over). That is when you (or your users) will start to feel the pain of exponential-time algorithms.

I ran some tests to see if I could identify the big O time complexity for SortValues. I plotted out the times it took to sort text lists with increasingly larger numbers of values and then overlaid that on top of O(n log n) and O(n^2) graphs. The input values consisted of randomly selected words, so this data is representative of neither best-case nor worst-case scenarios, but somewhere in between. 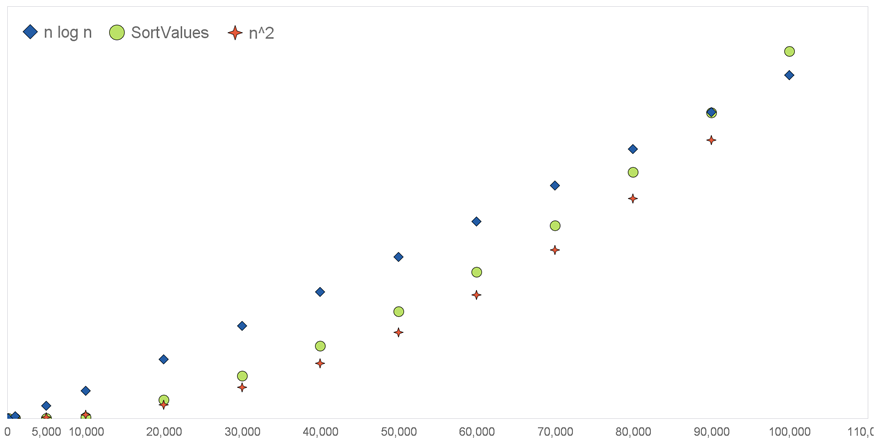 I conducted 4 test runs, and they suggest that SortValues is an average-case O(n^2) algorithm.

Based on these observations (n^2 and stable sort), the underlying sorting algorithm is likely one of these:

I was curious to see how the new native function compares to some of the sorting custom functions available in the FileMaker community.

The two custom functions used as comparisons are:

The new native SortValues function did perform better than the SortList custom function. However, when sorting very large lists (more than 10,000 values), the QuickSort custom function was faster. This is both surprising and unsurprising. Surprising, because I had expected that a native function would outperform a custom function. Unsurprising, because the QuickSort algorithm is known to be average-case O(n log n). In other words, now that we’ve observed SortValues as being O(n^2), it’s no surprise that an O(n log n) algorithm will overtake it once the size of the list being sorted reaches a certain point. 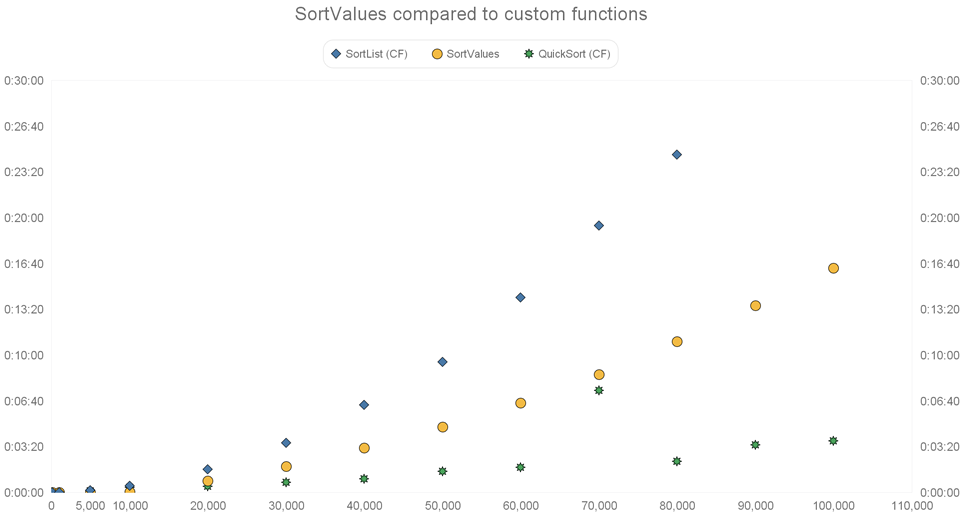 The good news is that sorting lists that large tends to be quite rare. And, when working with smaller data sets (less than 10-20K), the new native SortValues function performed faster than even QuickSort, which seems to indicate that its execution is more efficient per-iteration. 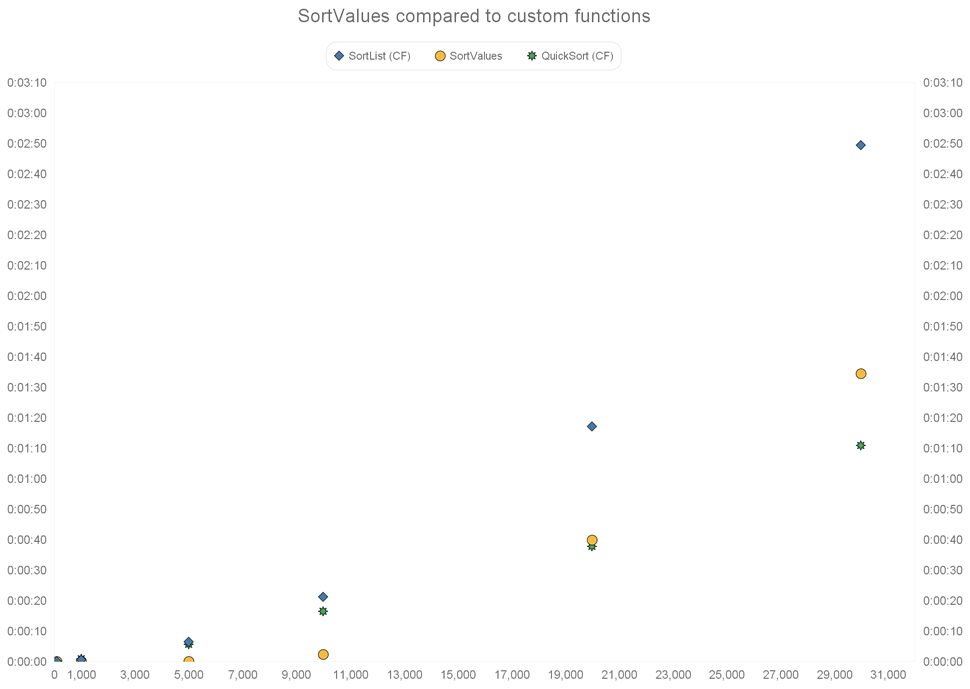 If you’d like to take a closer look at the test results or run your own tests, you can download the demo file:

SortValues and UniqueValues are welcome additions to the FileMaker text function library.

You can control case sensitivity by using the Unicode_Raw locale.

The underlying algorithm for SortValues appears to be O(n^2); however, for most real-world FileMaker applications, the data sets are too small for that to matter.

Mislav is a FileMaker developer and a Senior Technical Project Lead at Soliant Consulting.